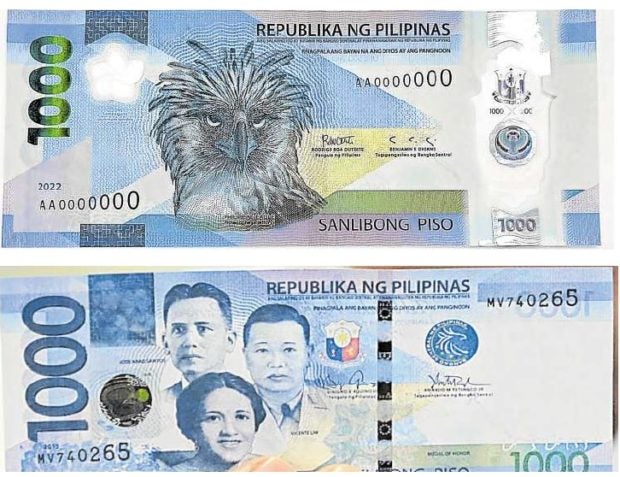 NEW DESIGN New P1000 notes with the Philippine eagle (top) will be issued in April next year. The current note features three heroes who sacrificed their lives during the Japanese occupation. —PHOTO BY BANGKO SENTRAL NG PILIPINAS

During a press briefing, the Governor of Bangko Sentral ng Pilipinas (BSP), Benjamin Diokno, defended the controversial decision which has drawn criticism from various sectors since its announcement last week.

“BSP will continue to print the existing P1,000 banknote with the three heroes, even though we will circulate the new polymer P1,000 banknotes,” he said, adding that the current design will not be demonetized.

Critics worry that the central bank’s policy of shifting the design of peso banknotes to the country’s endemic flora and fauna is part of a wider move to remove images of all prominent historical figures from the currency filipina.

Diokno said, however, that the changing theme is only part of a cycle “designed to welcome and celebrate numismatic artistry and dynamism.”

“Over the past few decades, BSP has featured both our heroes and our natural environment in our motto,” he said. “We believe that both are important: our cultural preservation and the promotion of our heritage. Both deserve to be celebrated through our coins and banknotes.

He said the central bank’s Monetary Council had chosen the Philippine eagle – already featured in pesos in previous years – because it is an endangered species and one of the most popular birds of prey. most powerful in the world.

The new banknotes that will be made from polymer will enter their circulation test phase in April or May next year, during which authorities can validate whether the benefits reported by other countries are applicable locally.

“The largest (P1,000) and most widely circulated denomination in the Philippines,” he said. “It is also the subject of the most counterfeiting attempts, although it has the most security features and is therefore the most difficult to tamper with.”

Meanwhile, Deputy House Minority Leader and Representative of Bayan Muna Carlos Isagani Zarate and Representatives of Bayan Muna Ferdinand Gaite and Eufemia Cullamat on Tuesday tabled House Resolution No. 2412 urging the banking group and House financial intermediaries to investigate with the help of legislation the removal of the three war heroes from the new note.

“Banknotes not only represent a country’s tourist attractions, but what a nation holds dear, and serve as a constant reminder to its people. Eliminating our heroes is a way of erasing them from the Filipino psyche; it is a divisive revisionist makeover,” the resolution said.

The Chairman of the House Senior Citizens Committee and Rep. Rodolfo Ordanes, for his part, have asked BSP to keep the current design of Bill P1,000 in circulation.

“You can always put more security features into our coins and banknotes without changing the design,” Ordanes said.

Abad Santos, Escoda and Lim have been commemorated in Philippine currency since the introduction of the P1,000 banknote in 1991.

Escoda’s nephew, Jose Maria Bonifacio Escoda, said removing the heroes was like “killing those three people again and it’s more painful than what the Japanese did because those redrawing the tickets are Filipinos. “.

Lim’s great-grandson, Vicente Lim IV, said the redesign of the ticket “comes at the cost of erasing one of the last ubiquitous means by which we remember and honor our historic past and the heroes who martyred themselves for our country”.

But Malacañang defended the BSP’s decision to print a new P1,000 note, saying the old design featuring the faces of three Filipino patriots would continue to be in circulation even with the release of a new one with the eagle. Filipino.