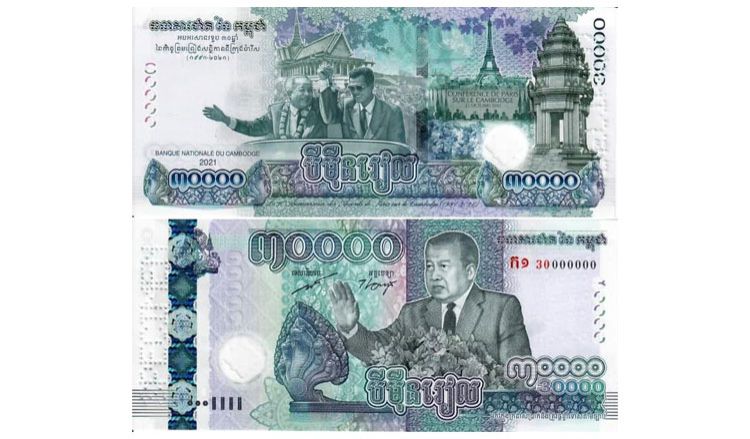 PHNOM PENH, Oct. 19 (Xinhua): The National Bank of Cambodia (NBC) has officially issued a 30,000 riel (US $ 7.5) note to commemorate the 30th anniversary of the Paris Peace Accords.

A sub-decree on the issuance of the 30,000 riel note was signed by Cambodian Prime Minister Samdech Techo Hun Sen.

The new note displays a portrait of the late King-Father Norodom Sihanouk on the obverse and his photo taken with Hun Sen on the reverse, NBC Governor Chea Chanto said in a statement.

On the back, it also represents the images of the Independence Monument in Phnom Penh and the Eiffel Tower in Paris.

He said the main colors of the banknote were green, brown and purple.

The Comprehensive Peace Agreements in Cambodia negotiated by the United Nations, better known as the Paris Peace Agreements, were signed on October 23, 1991 by the Cambodian government led by Hun Sen and the Democratic Kampuchea represented by Khieu Samphan, the former head of state of the regime.

At the same time, the Cambodian Ministry of Health reported 175 new cases of Covid-19 on Tuesday, 34 of which were imported. He noted that all cases were confirmed by polymerase chain reaction (PCR) testing.

The ministry also reported 11 new deaths and 271 recoveries, noting that eight of those who died had not been vaccinated against Covid-19.