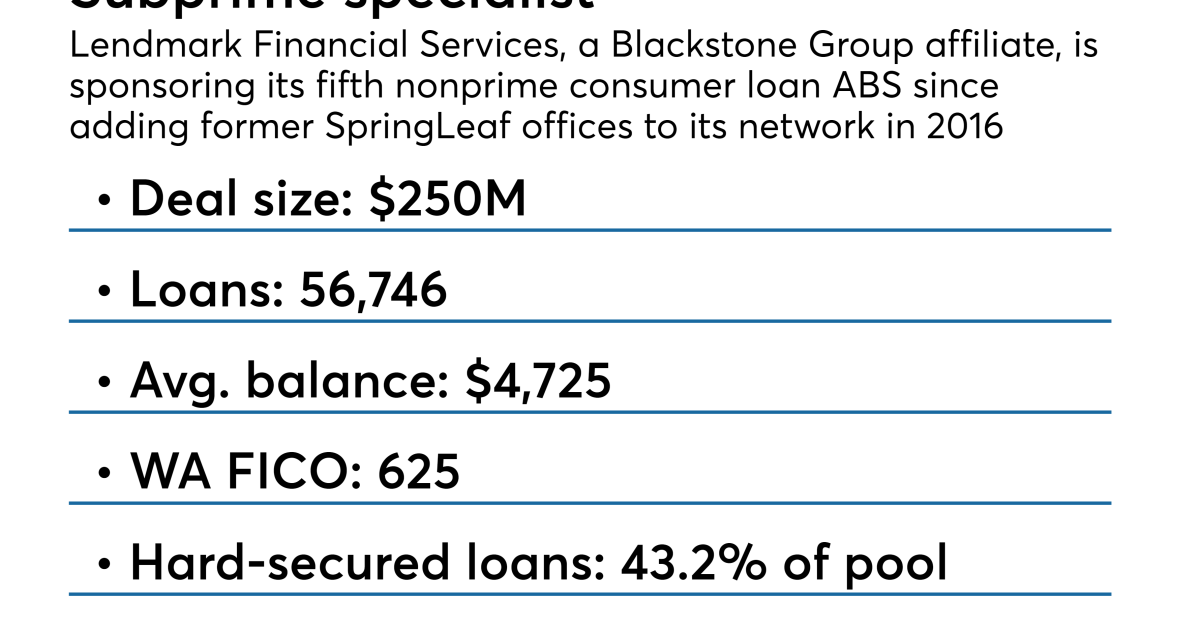 DBRS plans to assign an AA to the $ 250 million Lendmark Funding Trust 2018-1 Senior Notes, while S&P Global Ratings has issued only one A to the $ 196.2 million Class A Notes of dollars.

DBRS’s rating is based on its assumption that losses will reach 10.35% over the life of the trade, while S&P expects losses to be much higher, in the worst case a loss rate. expected annualized monthly of 15.49% for the portfolio.

This is the fifth global securitization of subprime and subprime loans issued and managed by the lender affiliated with the Blackstone group, which operates 319 branches concentrated in the South East and Central Atlantic regions.

These branches include 127 former consumer credit bureaus of Springleaf Holdings acquired in 2016, after Springleaf divested them in 2015 as part of its own acquisition of OneMain Financial from Citigroup. The former Springleaf offices were later incorporated and renamed into the Lendmark footprint.

The 2018-1 pool loans were issued through the legacy Lendmark and Springleaf branches, as well as direct mail solicitations.

The transaction includes three classes (B, C and D) of subordinated notes totaling $ 53.72 million, with DBRS A, BBB and BB ratings. S&P assigned lower ratings to Class B (A-) and Class C (BBB-), but matched DBRS’s rating on the most junior bracket.

LendMark included a higher percentage of unsecured loans (10.9%) in its latest deal compared to last November’s Lendmark 2017-2 deal (5.6%), but it also increased the proportion of secured loans at 43.2% against 39%.

Secured loans are primarily accounts secured by an automobile, while other secured loans are backed by consumer goods such as computers, furniture, and home furnishings.

The new agreement has an extended three-year renewal period compared to two years in Lendmark’s previous transaction, allowing Lendmark to add additional loans that meet investment criteria. (The percentage of unsecured loans could reach 30% under the covenants.)

Important things to consider before getting a consumer loan – London Business…