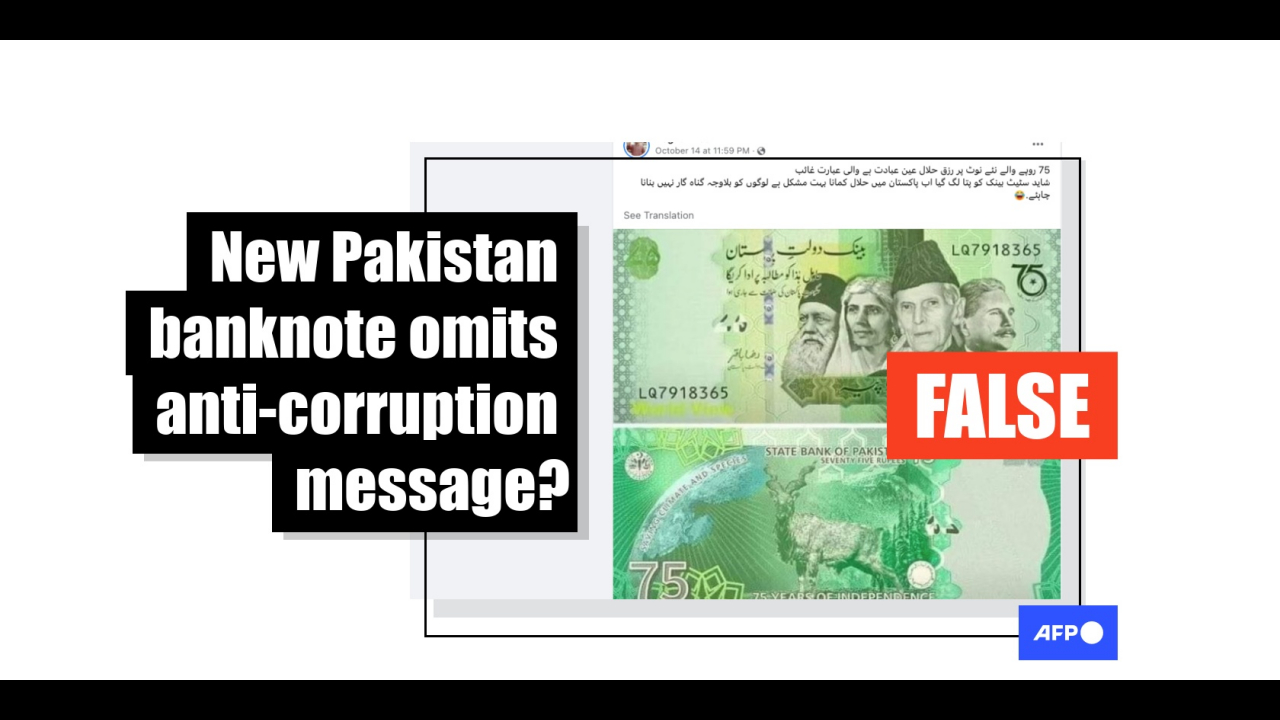 Several posts on Facebook and Twitter claim that Pakistan’s central bank omitted a quote on the importance of earning an honest living from the new 75 rupee note. It’s wrong. The quote – printed on all Pakistani banknotes – was included on the new banknote, which was issued to commemorate the Diamond Jubilee of Pakistan’s independence.

The complaint was posted in this article on Facebook on October 14, 2022.

It shows both sides of Pakistan’s new 75 rupee banknote.

The Urdu caption of the post translates to English as: “The quote ‘Earning an honest life equals worship’ disappeared from the 75 rupee note.

“Maybe the State Bank has realized that it is now very difficult to make an honest living in Pakistan, so they don’t want to unnecessarily turn people into sinners.”

The claim circulated online as Pakistani Finance Minister Ishaq Dar promised international lenders to stick with economic reforms despite a new estimate that his country urgently needs more than $16 billion to recover devastating floods. AFP reported on the developments here.

Comments from some Facebook users indicated they believed the claim to be true, while others responded by taunting Pakistani authorities.

“….The people who posted this don’t believe in making a proper living,” another Facebook user wrote.

But the assertion is false.

The new 75 rupee banknote also bears the quote on the reverse, which translates to: “Earning an honest life equals worship”.

The quote can be seen in this video tweeted by the State Bank of Pakistan:

The new Rs75 commemorative note is now available to the general public at all SBP BSC offices and commercial bank branches. This note is legal tender and can be used as a medium of exchange for all transactions across Pakistan. pic.twitter.com/EFuU1rHtr1

Below is a screenshot of the central bank’s explanation of the features of the new banknote issued to mark Pakistan’s 75th Independence Day.

We see the quote in question printed on the back of the note, highlighted in red by AFP:

A screenshot taken on October 15, 2022, of a poster explaining the features of the new commemorative banknote. (AFP)

The same calligraphic inscription can also be seen in the images of the banknotes in the false posts.

Below are screenshots comparing the banknotes in the fake messages (left) and the chart from the State Bank of Pakistan (right):

Since October 16, 2022, the same anti-corruption message has been printed on all Pakistani banknotes in circulation.

Should you take out a personal loan when you have savings you can count on?