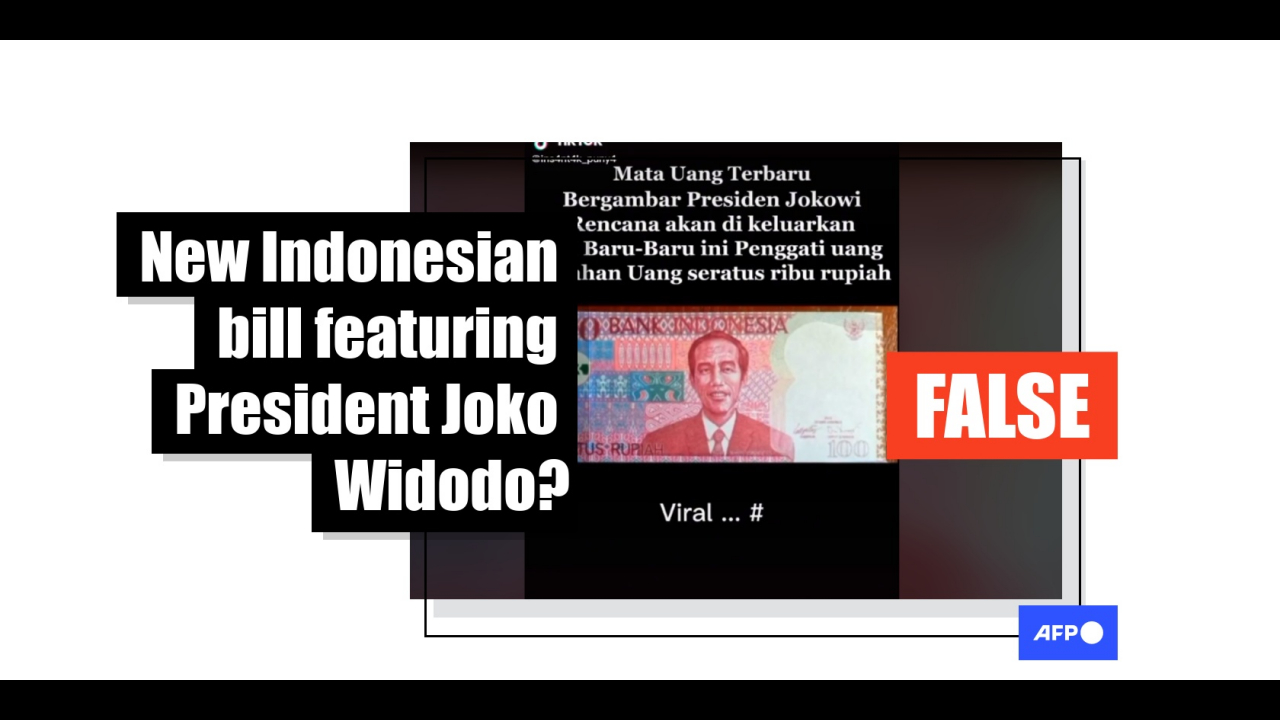 An image of an alleged new Indonesian banknote featuring the country’s President Joko Widodo, popularly known as Jokowi, has been circulating in several posts on TikTok, Facebook and Twitter. However, the claim is false. Indonesia’s central bank, the sole authority to issue currency, told AFP the image did not show legal tender.

“A bill that features a photo of President Jokowi,” reads the caption of this video, which was posted on TikTok on June 21, 2022.

The nine-second video, which shows an alleged new 100 rupee banknote, has garnered over 2.2 million views.

It translates into English as: “A newly released bill which features a picture of President Jokowi. Planned to be released by BNI recently as a replacement for the 100,000 rupee note.”

The 100,000 rupiah note, the highest denomination issued in Indonesia, bears the image of the country’s founding fathers: the first president, Sukarno, and the first vice-president, Mohammad Hatta.

The Indonesian government is considering reducing the nominal value of the rupiah by three zeros in an effort to simplify the currency – for example, 100,000 rupiah would become 100 rupiah.

However, the state-owned BNI does not have the power to issue legal tender.

Under Indonesian law, only the central bank, Bank Indonesia, has the right to issue and circulate the rupiah.

Responding to the messages, a Bank Indonesia representative told AFP on July 13, 2022, “The information is not true. Bank Indonesia did not issue this 100 rupee note.”

The representative added that information about the issuance of a bill is always “announced by the media”.

A Bank Indonesia spokesperson was also quoted in Indonesian media, such as here and here, refuting the claim, saying that Indonesian money only features images of national heroes and deceased individuals.

“This means that individuals who are still alive will not [be featured on bill]“, Erwin Haryono, executive director of communications at Bank Indonesia, told reporters on July 12, 2022.

The purported bill shown in the video is not on the Bank Indonesia website which shows all bills currently in circulation.

Below is a screenshot of Indonesian banknotes, posted on the Bank Indonesia website: