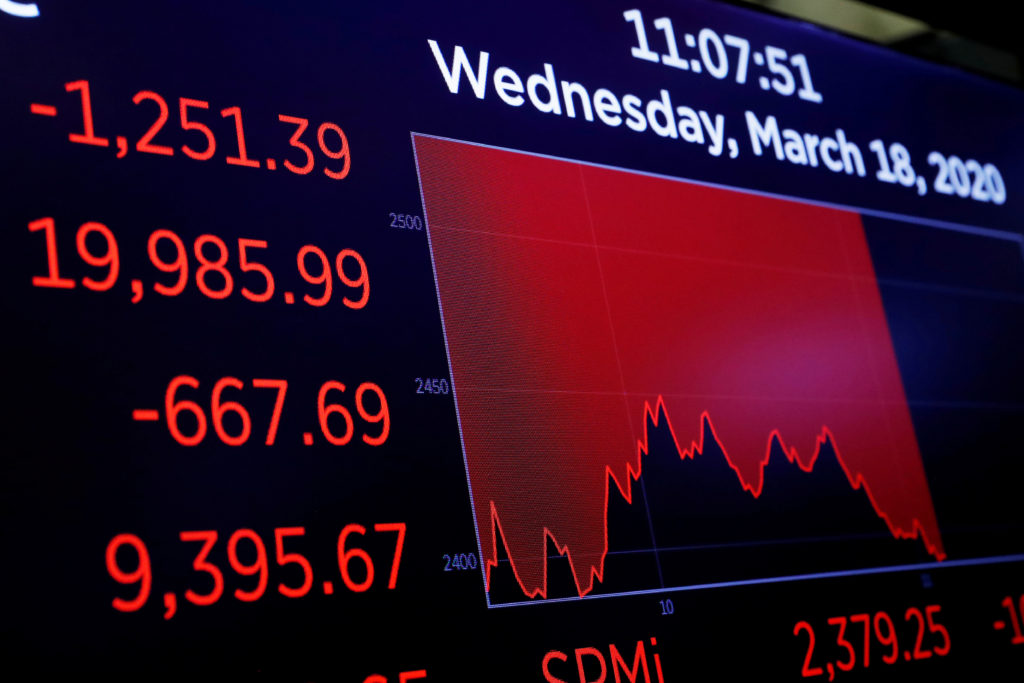 Wall Street pulls back as dismal economic data piles up

Stocks tumble on Wall Street on Thursday after new reports made clear the global devastation the coronavirus outbreak is causing the economy.

The stark numbers helped send most U.S. stocks tumbling, and the S&P 500 was down 1.2% in afternoon trading. Treasury yields also fell, while European stocks fell more sharply, dampening a strong rally that had circled the world a day earlier.

“This is the saddest day for the global economy we have ever seen” in the 50 years that economists at High Frequency Economics have tracked economic data, they wrote in a report. “Statistics offices in the economies we monitor released 19 economic reports overnight. They revealed historic declines in activity and a rise in unemployment on a scale we had never seen before. We are sad.”

Among the lowlights: In the United States, an additional 3.8 million workers filed for unemployment benefits last week as layoffs continue to hit the country. In Europe, the region’s economy has collapsed to its worst degree in at least 25 years.

Even with Thursday’s losses, the S&P 500 is still on track to close its best month in decades. Stocks have surged since late March on promises of massive bailouts from the Federal Reserve and Congress. More recently, some US states and nations around the world have drawn up plans to ease restrictions that were intended to slow the spread of the virus but also stifle businesses and jobs.

Because of this, some investors have essentially written off a few horrific months of corporate earnings and economic data, and are instead focusing on the prospect of a return to growth later this year. The S&P 500 is up 12.3% in April. Depending on where it ends the day, it will close its best monthly performance since 1987 or the mid-70s.

Some big tech titans reported first-quarter results that weren’t as bad as investors expected, which helped limit market losses. Facebook rose 5.3% after announcing that ad revenue trends stabilized in April after a sharp decline in March. Microsoft edged up 0.4% after announcing better-than-expected first-quarter results. They are two of the largest stocks in the S&P 500, which gives their movements outsized weight on the index.

But about nine out of 10 stocks in the S&P 500 fell after reports showed the economic and financial pain worsened further.

Along with U.S. unemployment figures, which took the total to 30 million in just six weeks, data released on Thursday showed consumer spending fell a record 7.5% in March from the last month. This is crucial because consumer spending accounts for 70% of the entire economy.

McDonald’s tumbled 1.6% after last quarter earnings fell short of Wall Street expectations. Even at its restaurants that have reopened, the company said customers have been slow to return to their old pre-pandemic routines. In China, which was the first country affected by the epidemic, 99% of restaurants have resumed operations, but demand has not returned to the same levels.

Among European countries that use the euro, the economy contracted by 3.8% in the first three months of the year compared to the previous quarter. It’s the biggest contraction since records began in 1995.

The European Central Bank promises to support the economy in pain and on Thursday lowered the interest rate on the long-term loans it grants to banks. It also offered a series of new credit lines to banks at a quarter of a percentage point below its main benchmark rate, which is zero.

Many professional investors have been skeptical of the stock market’s big rally over the past month. Even though encouraging figures have been released about the epidemic, it is still unclear how long this recession will last and if new waves of infections could strike.

Other segments of the market, from bonds to commodities, showed more pessimism.

In another sign of caution, the 10-year Treasury yield fell to 0.59% from 0.62% on Wednesday night. It started the year near 1.90% and Treasury yields tend to fall as investors revise their expectations for the economy and inflation down.

Benchmark U.S. crude oil continued its extreme swings, jumping 15.9% to $17.45 a barrel. It is still well below the level of around $60 where it started the year as concerns mount over the effects of a collapse in demand. Brent crude rose 4.1% to $25.23.